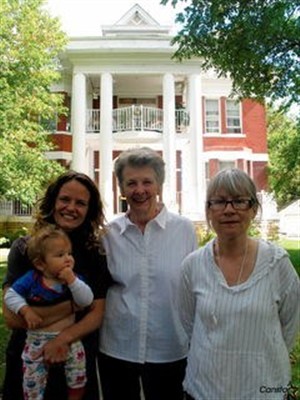 If you’ve ever wondered what the historic homes in Armstrong’s Point look like inside, you will soon have an opportunity to find out.

Residents of one of Winnipeg’s oldest neighbourhoods will be showing off their homes during the third annual Armstrong’s Point Heritage House Tour on Sept. 23.

Not only will visitors get a look inside eight of the area’s oldest historic homes, they will take a walk back in time. All of the homeowner participants will be wearing period costumes, and organizers have arranged for antique cars to be parked in the driveways of each of the homes.

Armstrong’s Point resident April Kassum said she hopes the event will offer people an opportunity to connect and preserve the area’s history, and provide a chance to share in the homeowners’ enthusiasm for their neighbourhood.

“Toronto has Rosedale, Vancouver has Shaughnessy, and Winnipeg has Armstrong’s point,” she said. “The whole city of Winnipeg really has to be concerned about trying to maintain this as their heritage neighbourhood.”

Kassum’s home at 5 East Gate is one of the home’s featured on this year’s tour. She and her family moved into the home in 1997 and instead of moving into a smaller home after their three children moved out, she and her husband decided to turn it into The Columns bed and breakfast.

Originally built in 1906, Kassum’s home was divided into a multiplex complex in 1939. It has housed both a nursing home and a boarding facility for Inuit people travelling to Winnipeg for medical care.

Kassum said her family has tried to restore the home back to its original charm.

“We’re trying really hard to maintain the original integrity as much as we can. We don’t feel like it belongs to us — we feel it belongs to everybody in Winnipeg,” Kassum said.

Pat Thomson’s 100-year-old home at 34 Middle Gate is another one of the homes which will be featured on the tour. She and her husband have owned the house for 30 years and, like Kassum, she feels obligated to maintain its original integrity.

“There’s such a charm to the old houses — they’re such special places and we feel we’re just custodians of them for a little while, and it’s our responsibility to keep them in tact as much as possible,” she said.

Thomson believes the upcoming house tour is a way to share her neighbourhood’s rich history with the rest of Winnipeg.

“I think it’s really important for Winnipeg to respect and celebrate its historic areas, and there’s a tendency on the part of a lot of people not to do that. This is a way for (our neighbourhood) to do it ourselves and let the rest of the city know we’ve got this gem that should be respected,” she said.

The day’s events will also include an art show featuring works by neighbourhood artists, a tea garden at the back of Kassum’s home, a 1912 style county fair, and an authentic street organ on display.

Tickets are $25 per person and are available at the Grant Park Shopping Centre McNally Robinson Booksellers, or by calling Kassum at 204-510-4803. All proceeds go to the Armstrong’s Point Association.