A Bummer Summer? No Way!

WINNIPEG – Not only were barbecues sizzling in August.  August MLS® sales were at record levels for this month and dollar volume shattered its previous best for August by going over $300 million for the first time. The same occurrence happened in July with dollar volume easily eclipsing $300 million too. MLS® sales were also at near record levels.

And like the fish that got away, if WinnipegREALTORS® had reeled in 8 more MLS® sales in August it would have reached a new milestone level of 1,300 for this month. This also happened in 2011 and 2005 where they were 10 and 7 short respectively of reaching 1,300 MLS® sales. Whether walking, biking, gardening, golfing, at the cottage or golfing at a course near your cottage, the 1600 strong REALTOR® network reached out across the entire WinnipegREALTORS® market region to deliver the best combined summer months of market activity in the association’s 110-year history.

Helping bring up dollar volume to the record level for August were three million dollar plus sales including a condominium that sold for just under $1,300,000 on Waterfront Drive.

An increase in MLS® listings continues to be one of the main highlights this year with new listings up 15% in August to 2,002. Active MLS® listings or the current inventory at the end of August is now over 4,000 and that represents a 20% increase over the same time last year.

“This summer’s return to a more balanced housing market benefited everyone,” said Richard Dettman, president of WinnipegREALTORS®.  “The upside potential to more new listings coming on stream and a higher inventory of properties to choose from is increased sales activity. Our combined sales from July and August did just that so demand remains strong in our local market.”

He added, “For buyers it meant more choice and for sellers it resulted in enhanced market activity and strong pricing. Compared to August last, sales numbers increased and dollar volume rose 9%.  Available listings are up 15%.  This larger home inventory translated into increased sales which I expect to continue for September and into the fall. We have a strong, viable local market and as we take our children to school we are going to see more REALTOR® listings along the way.”

Evidence of more balanced market activity came in August when there were twice as many homes that sold below list price as went for above list price.

Established in 1903, WinnipegREALTORS® is a professional association representing over 1,800 real estate brokers, salespeople, appraisers, and financial members active in the Greater Winnipeg Area real estate market.  Its REALTOR® members adhere to a strict code of ethics and share a state-of-the-art Multiple Listing Service® (MLS®) designed exclusively for REALTORS®. WinnipegREALTORS® serves its members by promoting the benefits of an organized real estate profession.  REALTOR®, MLS® and Multiple Listing Service® are trademarks owned and controlled by The Canadian Real Estate Association and are used under licence. 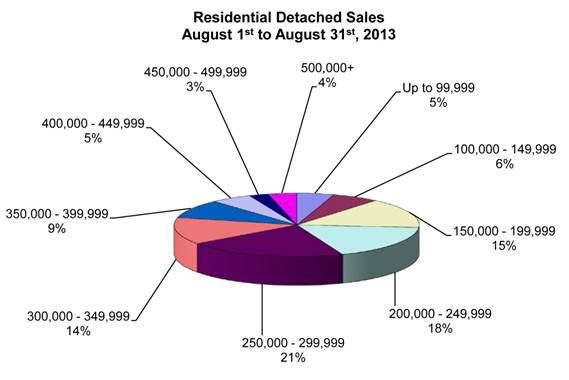