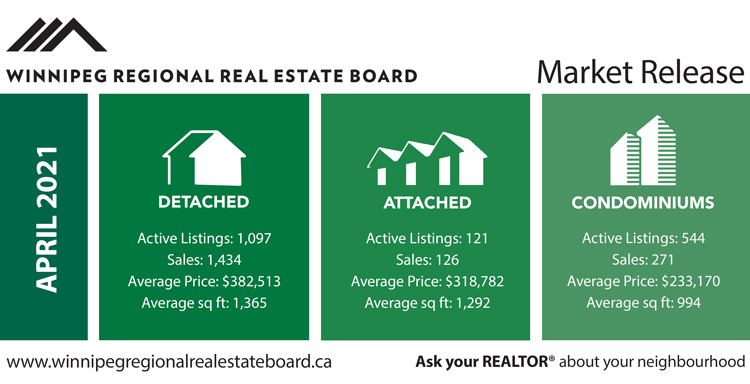 WINNIPEG, May 7, 2021 – For the first time in the history of monthly MLS® sales, the Winnipeg Regional Real Estate Board’s April sales tipped over the 2,000 threshold. The 2,055 sales in April edged out last month’s sales of 1,975 and are up 53% over the 5-year average for this month. Dollar volume set a new record monthly high as well in April with $678.3 million transacted in sales — a 65% rise over this month’s 5-year average.

The 2,615 listings remaining at month end are down 41% from the same time last year despite a dramatic fall off in new listings entered in April 2020 due to the pandemic economic shutdown. The good news is that year-to-date cumulative listings of 8,066 represent a 10% increase over 2020 and are less than 1% behind those entered in 2019.

In April, 78% of active MLS® listing supply turned over — and for single-family homes it was an astounding 131% — leaving less than a month’s listing supply going into May. 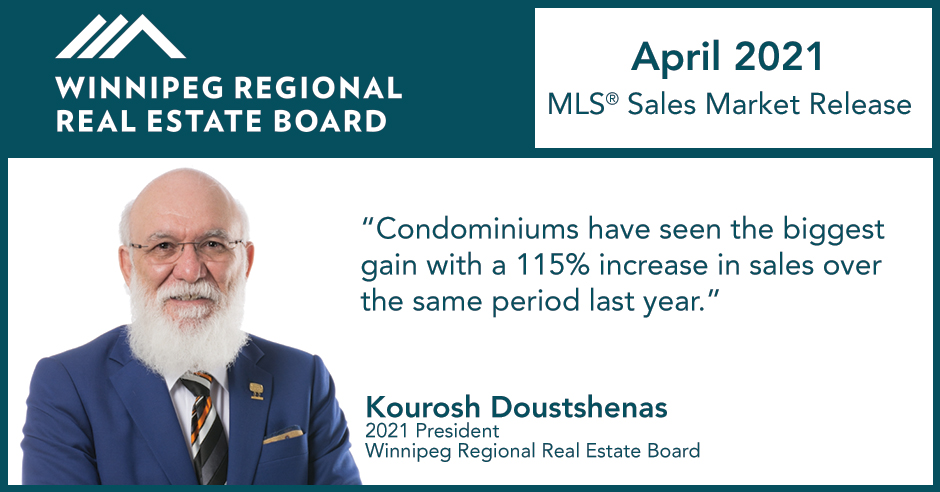 There were a number of MLS® areas throughout the entire Winnipeg Regional Real Estate Board’s market region where there are as many single-family home sales or more than the number of listings remaining at the end of April. River Park South had 31 sales with only 5 listings left for sale while St. James also had 31 sales with only 10 listings available for sale at the end of April.

Two MLS® areas in the first four months have had more sales than new listings entered this year. Transcona MLS® area has 82 sales versus 81 listings while the RM of Ste. Anne has 47 sales — 6 more than what has been listed in 2021.

“Rapid sales are depleting our listings quicker than we can replace them,” said Kourosh Doustshenas, president of the Winnipeg Regional Real Estate Board. “Our average continuous days on market for single-family home sales in April was three weeks and for sales from $350,000 to $399,999 it was just 2 weeks.”

Year-to-date MLS® sales after 4 months are 6,197, a 76% gain over the same period in 2020 while dollar volume of $2.0 billion increased 96% compared to 2020. The conversion of listings to sales is another metric indicating a supercharged market with 77% of all listings being sold. In the previous 5 years, this percentage has never attained 50% and you have to go back to 2004 and 2005 when the conversion percentage was as high as it is this year.
“Clearly, 2021 is a year like no other with buyers actively engaged in our regional market to place offers on many different property types and a wide spectrum of price ranges,” said Doustshenas. “Condominiums have seen the biggest gain thus far with a 115% increase in sales over the same period last year.” 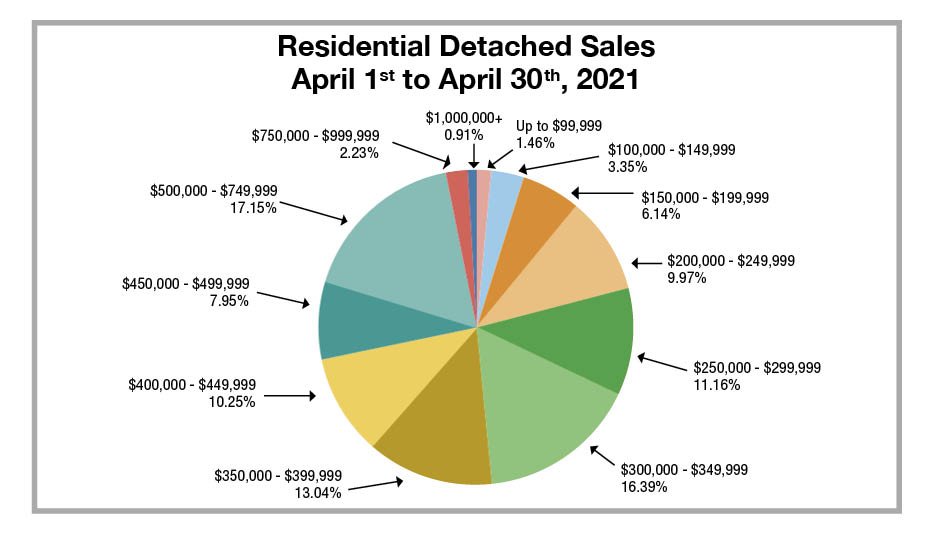 As for house prices, April was notable for a few reasons.

The southwest area of Winnipeg saw its average residential-detached sales price go over $500,000 to end up at $521,625 and also be at the half million dollar mark for the first 4 months. Given this area of Winnipeg has a significant portion of sales within the city, it is not surprising Winnipeg’s average residential-detached sales price was skewed upward to reach just under $400,000 in April. The region outside Winnipeg ended up at $351,000.

April also ushered in 13 one-million plus sales with nine selling in southwest Winnipeg, including the highest one at $2,250,000.

The brisk condominium sales in April saw the most sales activity at nearly 30% of total sales from $150,000 to $199,999 with the next busiest price range of $200,000 to $249,999 well behind at 18%.
“You are best advised to contact a REALTOR®,” said Marina R. James, CEO of the Winnipeg Regional Real Estate Board. “They know the current market and can help you navigate through all the housing options you will need to consider in making an informed decision.” 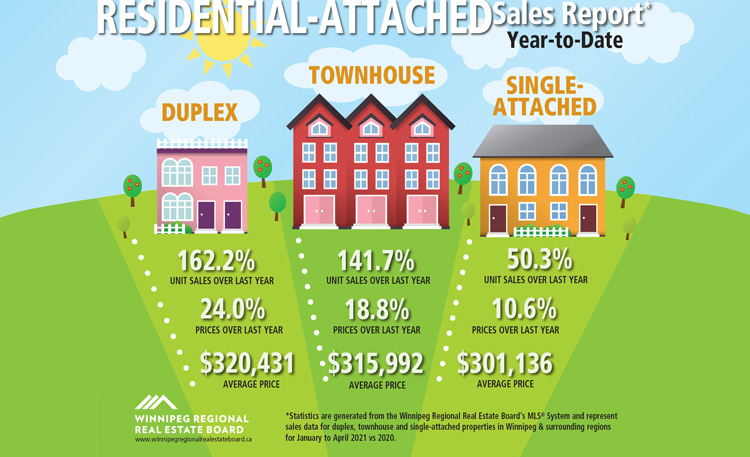 The Winnipeg Regional Real Estate Board (WRREB) is a not-for-profit corporation founded in 1903 by a small group of real estate practitioners. Today, as one of Canada’s longest running real estate boards, WRREB serves more than 2,100 licenced real estate Brokers and Salespersons, along with other industry related professions in and around the Winnipeg Metropolitan Region providing them with essential resources to enhance professionalism, advance the industry’s development and enrich the communities they serve. WRREB is the collective voice for both its residential and commercial REALTOR® Members and operates under the direction of an elected voluntary Board of Directors.

The MLS® is a co-operative real estate selling system operated and promoted by the Winnipeg Regional Real Estate Board that includes an up to date inventory of listings from participating REALTORS®.