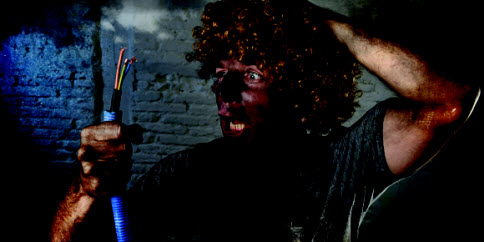 by Bill and Kevin Burnett

Kevin had a doctor’s appointment last week. He’s been a patient of Rodde Cox since 2005, so they know each other pretty well. Usually, the medical stuff is dispatched fairly quickly, and then the discussion gets into some friendly banter. The appointment is usually the last one of the day, so after the medical treatment, the time is spent “swatting flies and telling lies.”

We always preach safety first, but we don’t always practice what we preach. We’re passing along some tips to avoid doing the dumb things we’ve done, in hopes that the lessons we learned will save our readers a trip to the emergency room.

1. Use a push block to control wood when near the saw blade or router bit. Dr. Cox is an avid woodworker. He was working with a router mounted in a table when he tried to push a piece past the moving bit with his hand. He got a fingernail caught in a spinning bit. Fortunately for him, it just ripped the fingernail off. It was painful, but the nail grew back, in time. Given his profession, this could have been a career changer.

Kevin wasn’t so lucky. Years ago, he was ripping some fence pickets on his radial arm saw. Tedium got the best of him and he began gathering wool. He reached around the blade and opened up a gash between his thumb and index finger. Luckily, he didn’t sever a tendon.

2. Turn off the breaker when working with electricity. Both of us have gotten a little cocky around electricity. Bill was working on one of his houses doing some rewiring. He was under the house, lying on his back on damp ground, when he grabbed a live wire in a junction box. It took him a while to break free. No permanent harm, but it sure shook him up, and no more work was done that day.

Kevin was working on a garbage disposal and, being overconfident and lazy, he didn’t want to drag himself from under the sink to turn off the power. Sure enough, a misplaced hand got him bit.

3. Unplug saws, routers and other tools when changing blades and bits. Dr. Cox has a Shopsmith, a large, multipurpose tool that can be configured to do just about anything with wood, from cutting to sanding to shaping to boring holes. He was adjusting the tool when a faulty switch caused it to start. Again, no damage was done, but it was a close call.

4. When working with power drills and saws, push the blade or bit away from you. Kevin learned this one the hard way. We were replacing the brick foundation under Bill’s house; the house was properly braced with temporary supports. Kevin was cutting out the cripple studs to remove the mudsill. In a moment of brilliance, he decided to pull the reciprocating saw toward him. The blade bound, jumped out of the cut and plunged into his leg. There wasn’t any blood to speak of, but the muscle was cut, and he carries a lump and a scar to this day.

5. Take extra care when working with nail guns. Bill was framing a soffit during a kitchen remodel, holding the wood in place with his left hand and firing the nail gun with his right. The gun recoiled, sending a 16d nail three inches into his hand. This little misadventure required a trip to the emergency room, where the doctor removed the offending object with a common pair of pliers. The job stopped. Bill couldn’t use his left hand for a week.

These cautionary tales were close calls with little damage done. Not so for the final one. A patient of Dr. Cox’s managed to push his hand through a table saw. Knowing he did some damage and being a bit squeamish, he wrapped the hand up without looking at it and headed to the emergency room. The ER doc undid the makeshift dressing and noticed that the patient was missing two fingers. Apparently he left them on the shop floor.

His wife called the next-door neighbour and asked him to grab the severed digits for possible reattachment. A little later the neighbour called and said: “I’ve got some good news and bad news. The bad news is I can’t find the fingers. The good news is your dog cleaned up the mess.”

Dr. Cox swears this is a true story.

The bottom line is that overconfidence and complacency are your enemy. Pay attention and practice sound safety procedures.