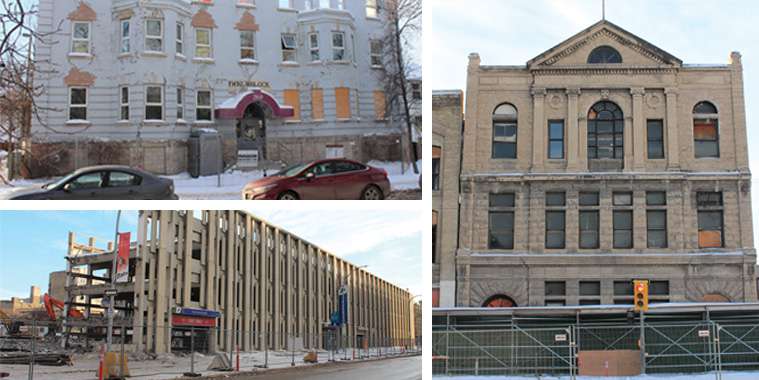 The year has just begun and already it has been a tough one for some of Winnipeg’s older buildings. Several have met the wrecker’s ball or are currently being demolished. In time, these sites will all give way to new developments, but before they become a distant memory, here is a look back at some of what we have lost.

The Hekla Block is the third West End apartment block to be demolished since Christmas.

The 21-suite apartment building opened in 1912 and was one of dozens of three-storey walk-ups erected in the West End by Icelandic developers.

It was designed by South African architect James Pender West. He resided in Winnipeg for just three or four years and is credited with a handful of buildings, most notably Hydro Substation No. 1 on King Street. Brothers Fridrik and Adalsteinn Kristjansson were likely the builders.

West used bay windows and side courtyards to maximize the amount of natural light and fresh air for each suite. The design was novel enough to be featured in the April 1912 edition of Construction Magazine, a national publication.

The Hekla has been owned by the Winnipeg Housing Rehabilitation Corporation (WHRC), an
affordable housing provider, since 1990.

Part of the building’s foundation failed in 2019. This was blamed on back-to-back extremely dry summers that caused the ground beneath the building to contract. After an engineer’s inspection, it was decided that the best remedy was to demolish it.

The WHRC plans to build a new, affordable housing block on the site, though plans and funding are not yet in place.

It isn’t surprising to see the Civic Centre Parkade being demolished. The structure was closed in August 2012 and has been vacant ever since.

The parkade and neighbouring Public Safety Building made up phase two of the Civic Centre complex. It was designed by Green, Blankstein, Russell and Associates who had already completed work on phase one, which comprised of the council and administration buildings of City Hall.  The four-storey reinforced concrete structure could hold nearly 500 cars. The basement level contained additional parking for police vehicles and fire department officials and housed the city’s signals garage. It was connected to City Hall by a tunnel beneath King Street.

The parkade cost about $1.36 million to build and when it opened on November 1, 1965 the casual parking rate was 15 cents for the first half hour, 10 cents for the second and 10 cents for each additional hour with a maximum daily rate of $1. Monthly parking set you back $12.

The parkade fell into disrepair. A 2007 report by the Winnipeg Parking Authority, the body that operated it, said that $6 million in renovations were needed to extend its functional life. The city decided not to invest the money and five years later, it was closed after an engineering study pointed out several structural integrity issues.

The demolition of the Public Safety Building will follow and the site, now called “Market Lands”, will be redeveloped. CentreVenture, the city’s downtown development agency, is in the early stages of determining what that redevelopment will look like.

A building waiting to find out its fate is Scott Memorial Hall.

The Orange Order is a Protestant fraternal organization established in Northern Ireland in the late 1700s. Winnipeg got its first Orange Lodge in the late 1870s and by 1900 there were about 100 located throughout the province.

In May 1900, plans for a new Grand Lodge based in Winnipeg were unveiled. They showed a four-storey building with ornate stonework and a small tower. Construction began right away and the cornerstone laying ceremony took place on July 12. The project soon ran into financial difficulty after the original $35,000 price tag ballooned and the site sat idle for a couple of years.

In 1902, the order hired architect Samuel Hooper to help them pare back the design to make it more affordable. The result was a building with only three storeys, two of which would be rented out to commercial tenants. Other cost savings came after Garson Quarry donated the stonework for the facade and contractor Thomas Sharpe, a prominent Orangeman, agreed to build it.

Construction resumed later that summer and on March 4, 1903 the Grand Orange Lodge was formally opened. It was named for Thomas Scott, the Orangeman who was executed by Louis Riel’s provisional government in 1870.

Like most fraternal organisations, the Orange Order’s membership declined steadily starting in the 1960s. The Scott Memorial Hall held on longer than most lodges thanks to its commercial space and being a popular downtown rental hall for banquets and other events.

The Orange Order sold the building in the 1990s and the last commercial tenant, the Antique Exchange, vacated in 2015.

The building was undergoing renovations in late 2019 when the foundation along the north wall failed. Its condition was serious enough to cause the closure of Princess Street. The results of a yet-to-be released engineering study will determine if anything can be done to salvage the building.