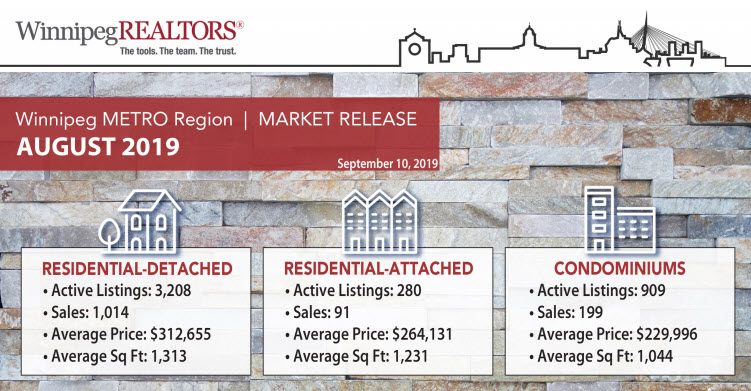 WINNIPEG – A record month of sales and dollar volume activity for August capped off a very active summer. July and August were identical twins when it came to sales. However dollar volume differed with lower dollar volume in August due in part to condominium sales activity showing much larger gains than single family.

August MLS® sales of 1,439 were up 13% over August 2018 and rose 9% above the five-year average for this month. The highest previous month of sales activity for August was 1,350 sales in 2016. August dollar volume of $411 million resulted in close to a 10% gain over the same month last year. It is the first time August dollar volume has eclipsed the $400 million mark.

The real highlight of August 2019 was the 37% increase in condominium sales over August 2018. The 199 sales are 19% higher than the five-year average for this month and a few sales below the best condo month sales performances ever for the Winnipeg Metro Region.

With the exception of 9 new condo sales in a Fort Rouge project, the vast majority of condo sales in August were resales with many of the larger percentage gains over 2018 occurring in the southwest quadrant of Winnipeg. When you add up the August condo sales activity of East Fort Garry, Linden Woods and Fort Richmond, there are 34 sales. There were 12 altogether last August.

“It is not often, if at all, when we see condominium sales outperform single family to the degree they did this month,” said Ken Clark, president of WinnipegREALTORS®. He added, “It means their year-to-date percentage gain over 2018 sales is greater than single family’s now.”

If condominiums were the lead standout in this record-performing MLS® month, there was a strong supporting cast of other property types besides single family. All property types saw increases over August 2018 with large double-digit increases in many instances. The 27 resort property sales increased 50% over 2018.

Inventory is somewhat elevated at over 6,000 listings and is 17% greater than we were at the same time last year, however overall we remain in balanced territory.

“It is becoming abundantly clear with the strong results we had in August that buyers are capitalizing on the incredible choice and vast array of affordably-priced properties available on our MLS® for sale,” said Clark. “A very favourable 5-year fixed rate in the current mortgage market bodes well for buyers heading into the fall season.”

“In a competitive market where there are so many listings to choose from, you need to hire a REALTOR® to make your property stand out and come up with the right strategy to sell your home,” said Marina R. James. “REALTORS® have the knowledge, expertise and tools to sell your listing.” 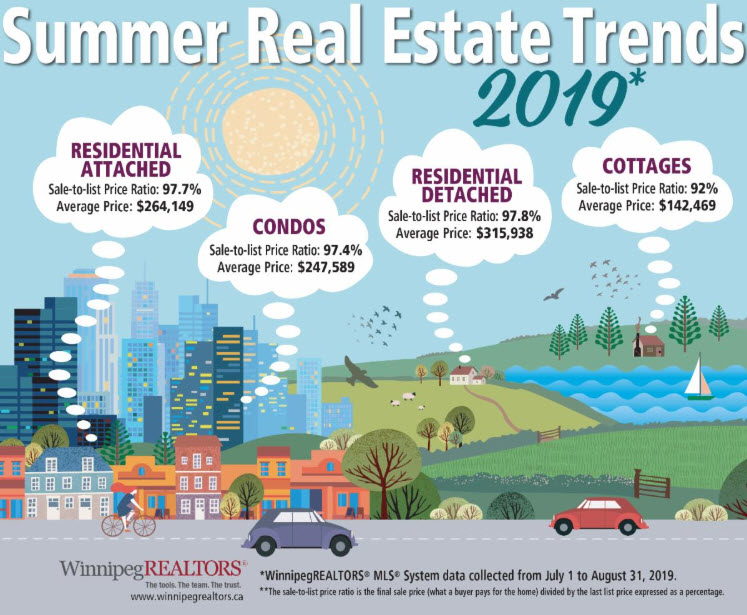 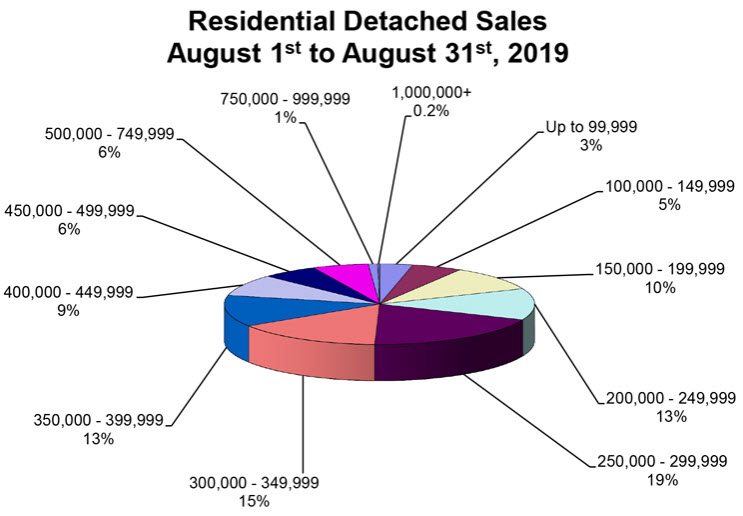 Since 1903, WinnipegREALTORS® has assisted its members in achieving high levels of excellence in organized real estate by providing superior tools and services that enhance and build a vibrant real estate industry. Representing over 2,080 REALTORS® and other industry related professions active in the Winnipeg metropolitan area, WinnipegREALTORS® promotes the value of a REALTOR® and organized real estate. WinnipegREALTORS® provides its members with essential market information, professional development sessions, networking opportunities, marketing products, an effective industry voice and strong leadership to further their professional success.