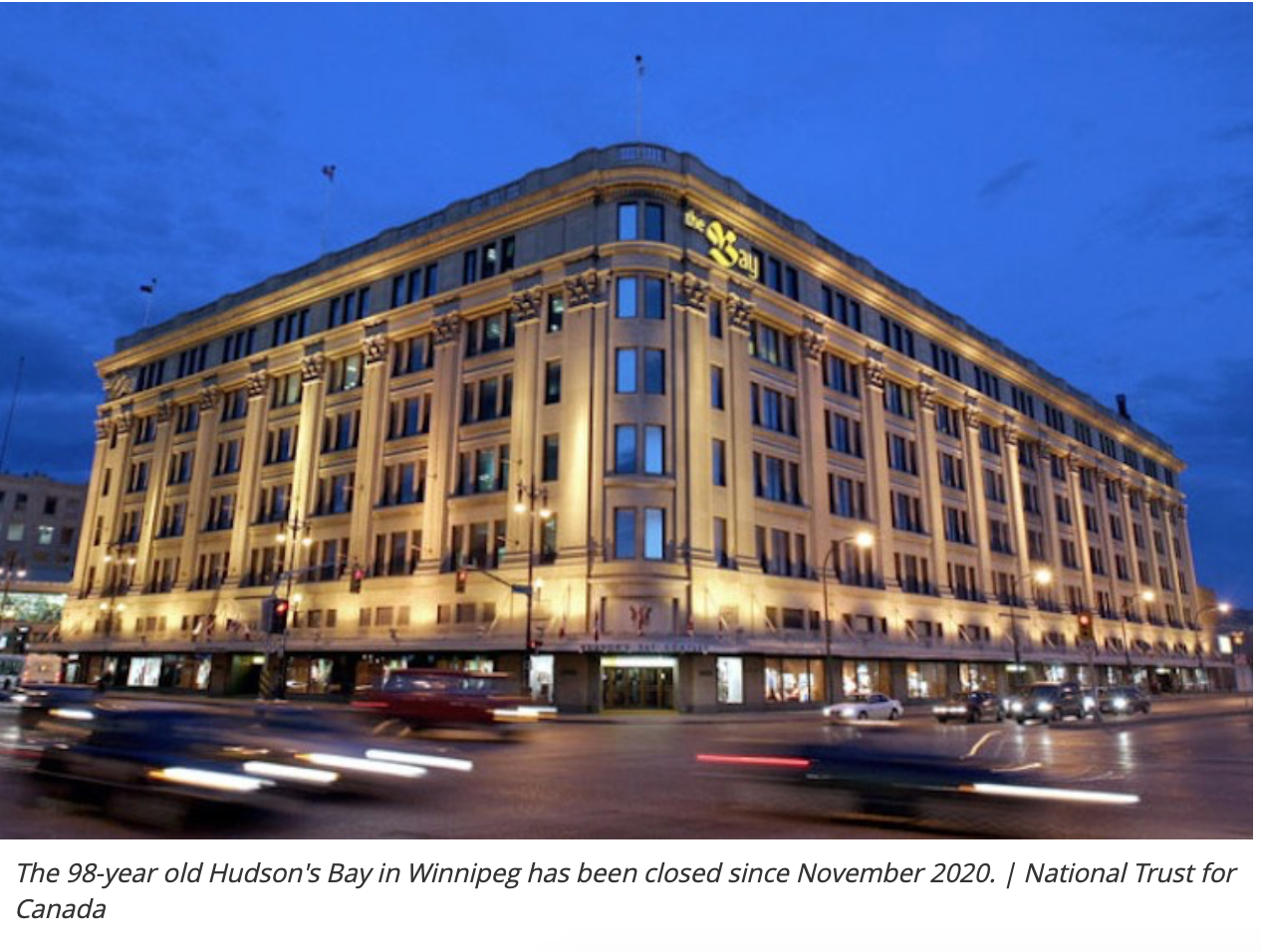 ‘Bay claims it “has received interest from a number of stakeholders” for the massive heritage building, but local real estate pros are skeptical’
Aug 12, 2021 1:22 PM
By: Frank O’Brien, Western Investor

The owner of the Hudson’s Bay building, which has loomed its 650,000-square-foot bulk over Winnipeg’s downtown for 98 years, is trying to find a buyer and a new use for the massive and shuttered structure.

“We believe there is value in this building, and we are in active discussions with strong organizations on its potential future,” Ian Putnam, president and CEO, HBC Properties and Investments (HBCPI) said this July. “We remain committed to working with partners to find opportunities for this location that will have a positive impact on the community.”

According to an HBCPI statement, the company “ has received interest from a number of stakeholders about the future use of the location.”

Dayna Spiring, president and CEO of Economic Development Winnipeg, who chairs a city-appointed advisory committee on the future of the HBC building, also expressed confidence that backers would be found to revitalize the six-storey property at 450 Portage Avenue.

Spiring envisions a contemporary renovation into a mixed-use, live-work complex with retail, offices and residential.

But a City of Winnipeg Heritage designation and the costly complexities of reworking the building into the 21st century makes demolition impossible and redevelopment doubtful, local real estate agents familiar with the building say.

The structure is located in the heart of the city’s downtown core and is a Winnipeg landmark. Built in 1923, it was one of the original six Hudson’s Bay department stores. The store abruptly closed in November 2020, three months before the closure was planned.

Sandy Shindleman, president of Shindico Realty Ltd., founded in Winnipeg in 1975, led a committee a decade ago that studied plans for the Hudson’s Bay building for two years.

“We looked at every proposal,” Shindleman said, and he reached the same conclusion then he holds now: the building is worthless and would require a minimum of $50 million to $100 million to revive it.

In a 2019 appraisal of the building, Cushman & Wakefield’s valuation concluded the building has a market value of $0. It would cost $111 million to just bring the building up to code, the agency estimated.

A knock against the structure is that its central interior is dark and, some say, would need to have an atrium punched through thick ceilings and walls that were among the first in Canada built with reinforced concrete. Shindleman, however, noted the building has large windows on three walls. “There is plenty of light,” he said, “Light is not the problem.”

The major challenge is the Heritage designation, he said, which requires at least the block-big façade be retained during any renovation.

“If someone came up with $80 million, we could make it work,” Shindleman said. “But I would advise them not to.”

Shindleman suggests the “stakeholders” that proponents talk about is some form of government money. In the April 2021 provincial budget, the province set aside a $25 million trust fund to help with redevelopment of the building.

So far there are no takers.

Other Winnipeg real estate veterans contacted were equally sceptical of a commercial rebirth of what should be centre-ice real estate in the heart of Canada’s seventh-largest city.

“The building is a monster and is now deemed historic, which significantly reduces the end uses,” said Wes Schollenberg, managing director of Avison Young, Winnipeg, in an email. “However, if someone has a great idea that will help revitalize downtown and preserve the wonderful character and memories of that iconic building, great.”