2016 is picking up where 2015 left off with a full recovery in condominium sales from early last year and residential-detached sales continuing to shine and show gains over the previous year. Beyond the two main property types, sales increases are also occurring in most others such as duplexes, vacant land, commercial, mobile homes, single-attached and town houses.

“Buyers are taking notice and advantage of one of the most affordable markets in the country,” said Stewart Elston, president of WinnipegREALTORS®. “They also have the benefit of choosing from a wide array and abundance of good listings.”

“Given the second quarter, our busiest quarter of the year, is performing so well, it does set us up to usher in another steady and impressive year of MLS® sales activity,” said Elston. “We may even look at adjusting our annual forecast projection at the end of June based on year-to-date numbers.”

Sometimes it is interesting to note where your gains are in sales over the previous year when you look at the price range breakdown. May 2016 saw quite a significant increase in residential-detached sales at the lower end of the spectrum from $125,000 to $149,999 but also experienced a sizable jump in sales activity from $475,000 to $599,999. As for condominiums, an upward shift is occurring with the $200,000 to $249,999 price range showing a 33% increase in unit sales over May 2015. 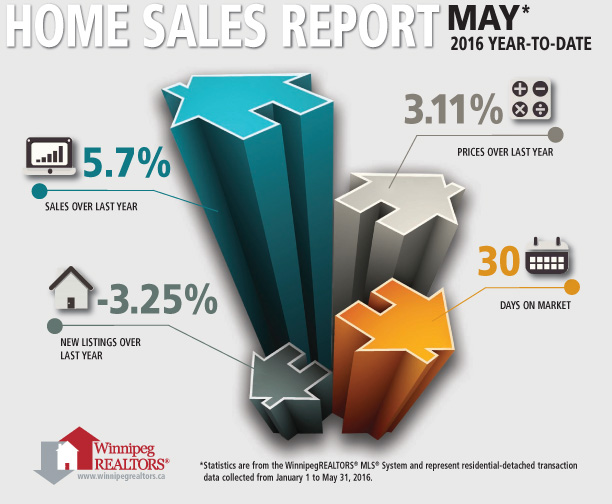