A massive mixed-use development is in the works on 112 acres of land owned by the University of Manitoba — the former site of the Southwood Golf and Country Club, which was acquired by the university in 2008 but has functioned as a park since. Global’s Erik Pindera picks up the story – Oct 30, 2020 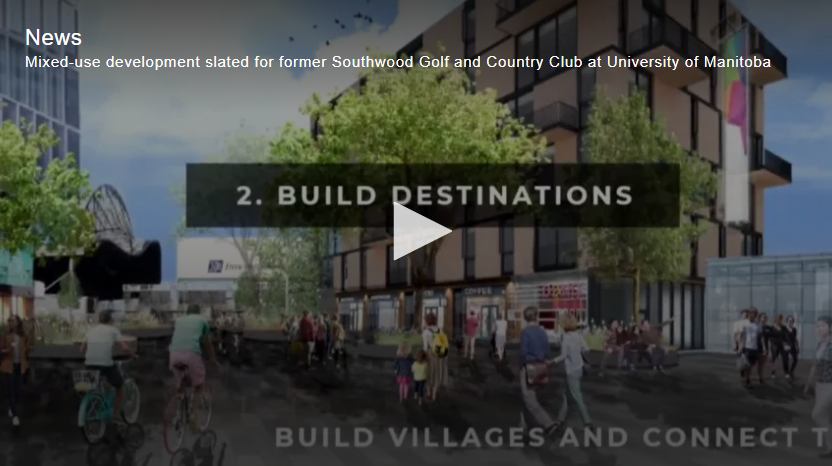 UM Properties, a land development corporation owned by the university but governed separately and intended to develop the Southwood Lands, aims to have between 1,500 to 2,000 residential units built in two buildings within four-and-a-half to five years.

The land will be leased from the corporation to private builders. The leasing proceeds will then go toward the university’s endowment fund.

The first phase of the development is expected to generate about $20 million, Rogers said.

The long-term project is meant to be walkable, with a transit hub in its centre and active transportation routes throughout, along with a parcel of land set aside for a museum dedicated to Indigenous Truth and Reconciliation.

“It’s going to be something really special done, in phases — the first phase being right next to the university so that people who live there, for whatever reason they have to be on campus, whether its to teach or work or go to school there, they can walk,” Rogers said.

The proposed project could see 10,000 residential units built in phases over 40 years, along with commercial development, green spaces dotted throughout the parcel of land and a kilometre-long park stretching along the bank of the Red River.

The first phase of the plan, which will snake along Sifton Road on the University of Manitoba campus, will go to city hall in December to begin the approval process — first to community committee and the property and development committee, then to executive policy committee and eventually, full council.

“On these lands will be developed about $3 billion worth of buildings over time by the private sector, so this is a big project for the City of Winnipeg in terms of its (economic) development potential… and also for the University of Manitoba,” said Rogers, a U of M alumni who has developed land projects across North America for nearly three decades.

Rogers said a goal is to improve the campus overall.

“Every great university has a great campus — the (U of M’s) campus kind of sucks, to be honest,” he said.

READ MORE: Student housing complex planned near U of Manitoba

Coun. Janice Lukes, whose Waverly West city council ward is home to the Southwood Lands, is excited to see the project move forward.

Lukes has long admonished the lack of housing adjacent to the sprawling university, which has led to illegal rooming houses popping up in surrounding residential neighbourhoods.

“In my four years working on this issue I think there’s over 1,000 units that have gone in but there’s still high demand,” she said.