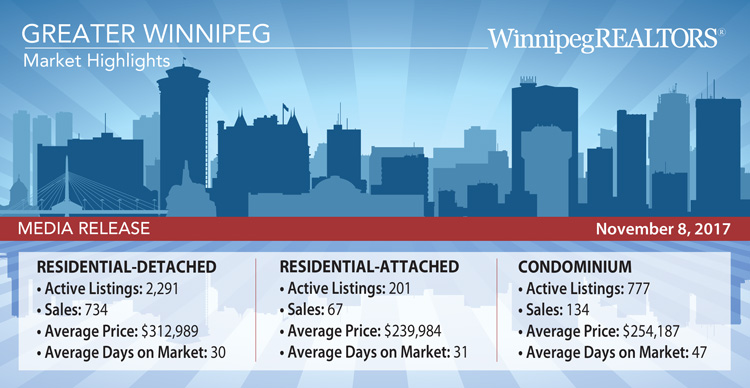 WINNIPEG – October sales decreased 10% from October 2016 and were off 4% from the 10-year October average. The drop in sales activity was largely predominant in the residential-detached and condominium property types selling for under $300,000.
The sales decrease in part, was the result of being up against increased sales activity in early October 2016 because home buyers then wanted to maximize their buying power before the October 17th stress test came into effect on insured mortgages. The new qualification requirement meant applicants had to qualify for the five- year fixed term Bank of Canada rate of 4.64 per cent.
October sales of 1,023 pushed year-to-date sales over 12,000 – only the second time this has happened and just 1% off last year’s record-setting pace of over 12,100 sales. Year-to-date dollar volume is the highest it has ever been at nearly $3.5 billion, up over 3% from 2016. Based on slower sales and dollar volume activity in the last two months of the year dollar volume, will not reach the $4 billion benchmark level but another annual dollar volume record will be set.
“October sales results clearly showed how government intervention in to the real estate market has affected it”, said Blair Sonnichsen, president of WinnipegREALTORS®. “The first-time buyer market for residential-detached properties has been softer this year and conversely more affordable property types such as single attached and townhouses have performed better.”
Both single-attached and townhouse sales this year are well ahead of 2016 with percentage increases of 10% and 23% respectively. Residential-detached sales are down 2% for the first 10 months.
One offsetting factor to mitigate a higher percentage decline in residential-detached sales in 2017 compared to last year, as a result of tougher mortgage qualification requirements, is a stronger move-up market.
Two examples back this point up. In October the southwest MLS® zone which had an average residential-detached sale price of over $400,000 saw sales increase this October while all the other more affordably priced MLS® zones ,including the rural MLS® areas outside Winnipeg, were either seeing fewer sales or flat in residential-detached sales activity.
Another example of stronger move- up activity this year is the significant difference in million dollar plus sales compared to the previous three years. For the first ten months there have been 45 sales in total, 40 residential-detached sales and 5 condominium sales. This compares to a total of 27 in 2016 and 20 in both 2015 and 2014.
“Our market may experience move-up sales activity than normal until the end of 2017 given that The Office of the Superintendent of Financial Institutions (OSFI) just approved a new stress test on federally regulated mortgage lenders with respect to insured mortgages commencing January 1, 2018,” Sonnichsen said. “Similar to last year’s higher qualification requirement on insured mortgages which has heavily impacted first-time buyers, this new guideline will affect move-up buyers more and will limit their ability to qualify for higher-priced homes. They must meet the minimum qualifying rate for an uninsured mortgage which is the higher of either the five-year Bank of Canada rate or one that is 2 percentage points higher than their contractual mortgage rate.”
Helping some Manitobans feel confident about advancing their buying decision now before this new stress test kicks in is the recent good news of job gains for Manitoba. Statistics Canada reported the Manitoba economy added 4,000 new jobs in October and as a result had its unemployment rate drop to 5.2 per cent, second only to British Columbia at 4.9 per cent.
Further, October 2017 MLS® sales activity reported prevalent condominium sales in the under $200,000 price range. These sales represented 44% of total condo sales. In comparison sales under $200,000 for the residential-detached property type were 16%.
“Whatever price range you are looking to buy in, you need to be calling a REALTOR®- a market expert who will help you navigate the ever changing real estate environment and real estate financing” said Marina R. James, CEO of WinnipegREALTORS®. 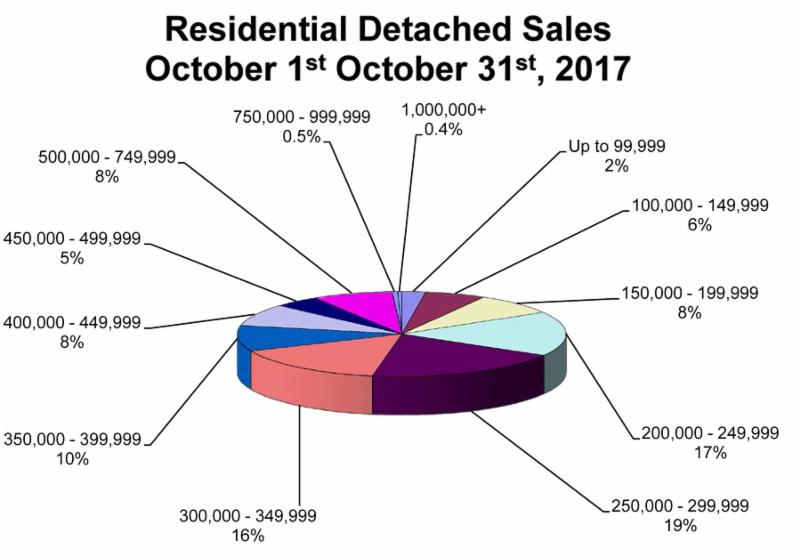 Since 1903, WinnipegREALTORS® has assisted its members in achieving high levels of excellence in organized real estate by providing superior tools and services that enhance and build a vibrant real estate industry. Representing over 1,900 REALTORS® and other industry related professions active in the Winnipeg metropolitan area, WinnipegREALTORS® promotes the value of a REALTOR® and organized real estate. WinnipegREALTORS® provides its members with essential market information, professional development sessions, networking opportunities, marketing products, an effective industry voice and strong leadership to further their professional success.
The trademarks MLS®, Multiple Listing Service® and the associated logos are owned by The Canadian Real Estate Association (CREA) and identify the quality of services provided by real estate professionals who are members of CREA. The trademarks REALTOR®, REALTORS® and the REALTOR® logo are controlled by CREA and identify real estate professionals who are members of CREA.