WINNIPEG – Condominium sales showed a marked jump in activity compared to January 2016 with a 36% increase. They are also up 17% over the 10-year average for January condominium sales. Overall, MLS® sales were slightly off last January’s total – ten sales to be exact. And similarly since residential-detached on WinnipegREALTORS®’ MLS® is by far the most dominant property type, there were sales of 400 compared to 409 in January 2016.

New MLS® listings coming on the market in January were down slightly too with residential-detached much the same and condominiums seeing a 5% increase over January 2016. It can be said a pattern is emerging where new condominium listings have steadily increased in January since 2012 and part of the explanation for this development is having more new condominium projects available on MLS®.

As a result these newly built condos are increasing their market share in terms of monthly sales. This January 29% of condos sold were new units where in January 2016 their percentage market share was 17%. Even with stronger condo sales in January the over 600 listings going into February are still elevated when you compare them to previous years. The only exception is last year where January condo listings were up 4% over this January.

It should also be noted the impressive showing of condo sales in January was borne out in the fact close to 20% sold for above list price in comparison to only 4% in January 2016.

“While one month does not make a year, it can give you pause to reflect on what may be around the corner,” said Blair Sonnichsen, president of WinnipegREALTORS®.

He added, “One thing to monitor will be whether the more stringent qualifying mortgage rules and even the City of Winnipeg impact fees coming in to effect on May 1, 2017, will affect the condominium sales activity.”

In summary, January MLS® unit sales of 561 were down less than 2% from the same month last year while dollar volume of $153 million was up nearly 3% compared to January 2016. The 1,502 new listings entered on the MLS® market in January decreased 1% and it left a little over 3,000 listings available for sale going into February. This active listing inventory is down 9% from 2015 and 2016 levels of just over 3,400.

Based on fewer MLS® sales in the first quarter of the year, the projected time of absorbing all of the existing inventory if there were no new listings coming on the market is five and one-half months. This compares favourably to last year at this time as it would have taken six months.

“One of the positive take-aways from January is the pick-up in condominium sales since the inventory remains elevated compared to its long term average.” said Peter Squire, market analyst of WinnipegREALTORS®. “It has also come to our attention that new condominium construction supply is coming down so builders are making adjustments to account for overbuilding in the condo market.”

Established in 1903, WinnipegREALTORS® is a professional association representing just over 1,850 real estate brokers, salespeople, appraisers, and financial members active in the Greater Winnipeg Area real estate market. Its REALTOR® members adhere to a strict code of ethics and share a state-of-the-art Multiple Listing Service® (MLS®) designed exclusively for REALTORS®. WinnipegREALTORS® serves its members by promoting the benefits of an organized real estate profession. REALTOR®, MLS® and Multiple Listing Service® are trademarks owned and controlled by The Canadian Real Estate Association and are used under licence. 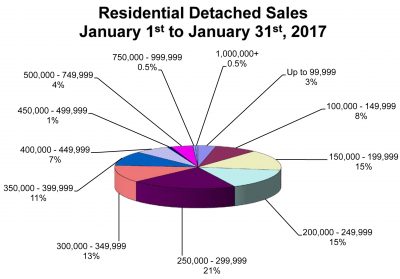 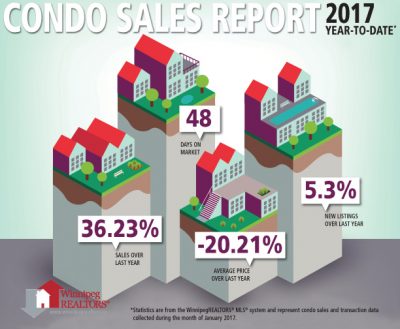