WINNIPEG – Not to take anything away from a respectable MLS® sales performance and new MLS® dollar volume record for September, but you have to shine the light most brightly on the sharp increase in new listings. The byproduct of this surge in new offerings for buyers left an end of the month inventory far larger and healthier than it has been in years. MLS® sales were ahead of last September by 8% and 3% over the 10-year average for September MLS® sales activity. September also sets a new dollar volume record, just edging out September 2011 when there were over 1200 sales.

September MLS® results conclude a very impressive third quarter where all the additional listings were capturing buyers’ attention. Dollar volume for the third quarter alone was less than $42 million away from reaching the $1 billion mark, well ahead of previous third quarters. Sales as well top out as best ever for this three month period. With leading edge technology available and an extremely active and co-operative network of nearly 1,700 REALTORS® adopting and embracing it, it should not come as much of a surprise that there is less seasonal divergence in monthly sales and listing activity. Being away from the office or workplace does not prevent an agent from keeping on top of a listing or sales transaction.

“The conversion rate, that is the number of sales divided by the number of listings expressed as a percentage, combined with average days on market, can be a keen measure of market strength,” said Richard Dettman, president of WinnipegREALTORS®. “September conversion rates have been greater than 30% for over a decade. This combined with the increase in the number of homes on the market, we can easily see a third consecutive $3 billion MLS® sales year.”

Despite the 58% increase in the condominium inventory and a 24% jump in residential-detached properties at the end of September compared to the same time last year, both respective property types are not seeing a real significant change in how many days they are staying on the market. Condominium listings at the end of September were on the market an average of 67 days compared to 63 in 2012 while residential-detached went down from 55 days in 2012 to 53 days this year.

Residential-detached listings priced over $600,000 have been on the market on average the longest at 68 days (77days last year). Inventory in the higher priced condo ranges is considerably reduced so the average numbers can be quite distorted given there is not enough of a sample size to make a reasonable assessment.

For the first time, condominium sales in the $200,000 to $249,999 price range challenged the previous long standing dominance of the $150,000 to $199,999 price range for highest sales numbers. The latter still prevailed at 31% of total sales but the former was a close second at 28%. The average days on market for condominium sales in September was 31 days, 4 days quicker than last month and the same time as September 2012.

Established in 1903, WinnipegREALTORS® is a professional association representing over 1,800 real estate brokers, salespeople, appraisers, and financial members active in the Greater Winnipeg Area real estate market. Its REALTOR® members adhere to a strict code of ethics and share a state-of-the-art Multiple Listing Service® (MLS®) designed exclusively for REALTORS®. WinnipegREALTORS® serves its members by promoting the benefits of an organized real estate profession. REALTOR®, MLS® and Multiple Listing Service® are trademarks owned and controlled by The Canadian Real Estate Association and are used under licence. 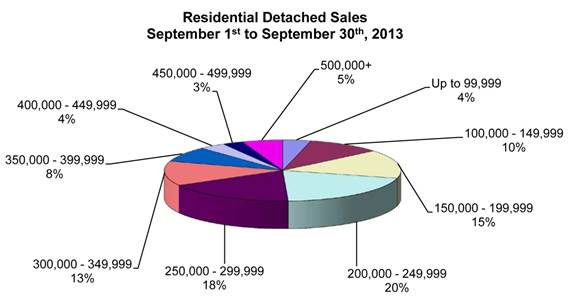