Uncover the history behind Osborne Village 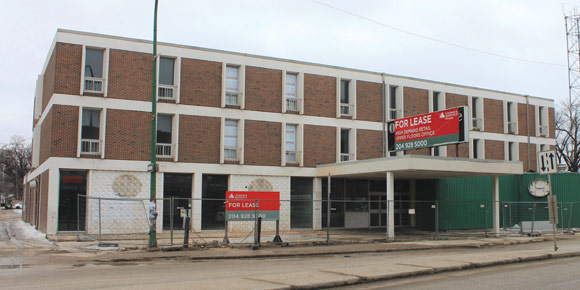 Once an exclusive suburb of Winnipeg, the area we now call Osborne Village faced demolition in the 1960s to make way for a freeway to the south end of the city. Its eclectic mix of residents and business owners rallied to save the neighbourhood and for the past fifty years has been one of the most popular urban spaces in the city.
River Manor Apartments
(1912, 1951)
424 River Avenue
Dr. Thomas Beath was born and educated in Ontario. He came to Manitoba in the 1890s to practice medicine at Ninga and Boissevain before settling in Winnipeg.
In 1908, he opened a private maternity hospital on Bannatyne Avenue which was bought out in 1911 by the city for use as an isolation hospital for scarlet fever patients.
Beath took the money from the sale, created a new company and bought this piece of land on River Avenue at Bole Street on which to construct a new hospital. The 100-bed facility cost $50,000 and was one of the first solo projects for architect Edmund Crayston.
The Victoria Hospital was in operation by mid-1912. Though primarily a maternity hospital, as a for-profit enterprise it took pretty much any case that came through the door except for infectious diseases.
Beath died in 1923 but the hospital he founded carried on. In 1951, a $460,000 extension to the west doubled its bed count to 200 and added four modern operating rooms. By the end of the decade the Victoria was accredited as a general hospital.
In the late 1960s, the hospital’s board decided that the old building was too crowded and out of date to be able to offer modern medical services. It decided to relocate to a much larger site on Pembina Highway near the University of Manitoba.
The old facility was packed up and its patients moved to the new hospital in a fleet of temporarily modified transit buses on January 16, 1971.
As for the old building, it was purchased later that year by a company headed by lawyer and developer William Rachman. The interior was gutted and rebuilt as residential units.
The 72-suite Habitant Apartments opened in 1972. The name was changed to River Manor in 1985.

Former Osborne Theatre (1912)
108 Osborne Street
At one time, most every neighbourhood in the city had its own theatre and Osborne Village was no different.
In August 1912, the Osborne Street Theatre Company took out a $50,000 building permit to construct one of the first custom-built movie houses in the city. It turned to architects Ross and MacFarlane of Montreal for its design.
The firm had recently come to national prominence for a series of hotels it had designed for the Grand Trunk Pacific Railway. They included the Chateau Laurier in Ottawa, Macdonald Hotel in Edmonton and Hotel Fort Garry in Winnipeg. In later decades, it was responsible for the Maple Leaf Gardens and the Hotel Saskatchewan in Regina.
The exterior of the 600-seat theatre had a basic outline but through the use of stucco and cast plaster, an ornate façade was created. Its numerous banks of windows were separated by borders of red, blue and gold tiles. The interior boasted extra-wide aisles and spaces between chairs for the comfort of patrons.
The Osborne Theatre opened for business on December 14, 1912 with a quadruple bill of films accompanied by a five-piece orchestra.
Disaster struck in December 1917 when fire gutted the building. The owners chose to rebuild and the “new Osborne” re-opened two years later. The decorative façade was gone but the new interior included a balcony and the latest in fire suppression and ventilation systems.
As with most of the city’s neighbourhood theatres, the Osborne struggled to survive the growing popularity of television. In 1957, it was put up for sale and purchased by the Winnipeg Elks club as their central lodge.
After the Elks departed in 1970 it became a retail building. First, as a Vita Food health food store and restaurant, then the Floating Ecstasy waterbed store.
Through the 1980s and 1990s it was home to a series of clubs, including Yuk Yuks Comedy Club and Die Maschine Cabaret before reverting back to retail in 2007 as an American Apparel store.
The building’s main tenant is now an Anytime Fitness gym.

Former Osborne Village Inn (1965)
160 Osborne Street
Starting in the 1950s, people were traveling more and more by car and wanted an alternative to the limited parking and tiny rooms offered by decades-old, downtown hotels.
It was Oscar Grubert’s Champ’s Foods International that hired architects Waisman Ross Blankstein Coop Gillmor Hanna to build this $900,000, three-storey, upscale motel.
Grubert’s company ran many restaurants but was probably best known as the Canadian rights holder for Kentucky Fried Chicken franchises. (Does anyone remember ordering “Champs’ Chicken”?)
The Champs Motor Inn opened in June 1965 and was not your typical motel.
It featured 32 spacious, air-conditioned rooms with custom-built furniture. There was a conference room for 250 as well as four restaurants and lounges, including the Cock and Bull, Winnipeg’s only charcoal pit steakhouse, and the Rolls Royce Piano Lounge which featured nightly entertainment.
Despite the success of the motel, Champs decided to sell up in July 1970 so that it could concentrate on the restaurant side of its business.
The buyer was a division of K-Tel International, owned by the Kives family. At the time, they already owned the Westminster Motor Hotel, (now Sherbrook Inn), and the Viscount Gort Hotel. They renamed their Osborne Village property the Plaza Motor Inn.
In 1978, the building was sold to the Green family. They rechristened it the Osborne Village Inn and turned it into an important and beloved music venue with spaces such as The Zoo and Ozzy’s Night Club.
The Greens sold the business in 2015 and the building’s 50-year run as a hotel came to an end.
A plan to convert the building into micro-apartments did not pan out and the property is currently for lease.
Christian writes about Winnipeg building histories on his blog, Winnipeg Downtown Places.